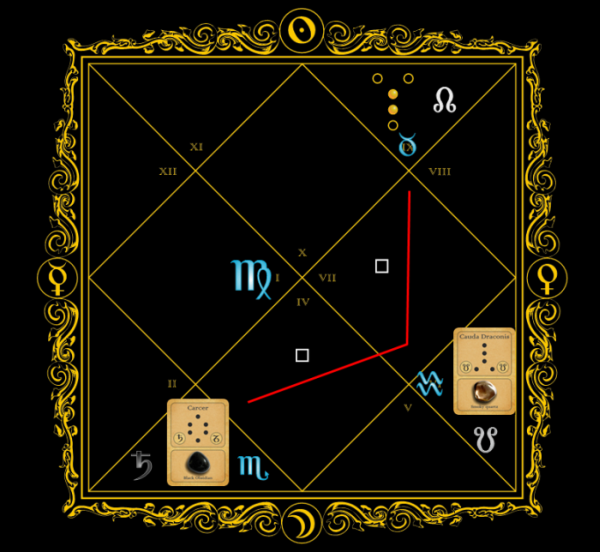 It’s likely that the square aspect between the geomes will be a significant part of how the Flow plays out this week. Squares often mean some hard lessons to learn at best and real difficulties at worst. I don’t see it as being ultimately as difficult a week as the casting might at first indicate. The Active Transform will again prove to be our help in times of need.

Carcer in the third (Scorpio) is going to put a heavy weight on your thoughts and words. So don’t look for help too much help from outside but rather seek your own salvation.

By the end of the week you are likely to feel purged of effort (and nicer way of saying ‘exhausted’, don’t you think?). Most likely you’ll find yourself saying ‘Thank goodness that’s done!’ by the end of Saturday. And in order to make your life a bit easier you’ll find it helpful to shut off the voice of your inner critic. Perfectionism really will not help this week, so don’t even try.

You’ll need to balance your desire to do good job with the time pressures to just get it done and out of the door. ‘Perfect’ will be the enemy of ‘the good’.

Part of the pressure is likely to be that you will be called upon to deliver results. Tight deadlines, a lot of work, getting things finished and getting some form of closure or completion — you can expect lots of that this week.

And in addition to having to deliver the goods you won’t be likely to get much back in the way of thanks, either. Cauda Draconis in the sixth house (Aquarius) is going to be somewhat of a cold schoolmaster, so don’t expect much gratitude even when you are expected to do far more than you thought you’d have to.

Given the way the Geomantic Flow works, others are likely to be feeling pressure, too, so they are likely to want to pass the pressure straight on to whoever they can. And if you don’t duck fast enough it’s likely to be you.

This is going to be a game of ‘pass the pressure parcel’, with the last person getting the responsibility for generating all the results.

There’s only a certain amount of this you’re likely to be able to dodge, so it’s better you know what this game is ahead of time.

Not only that but if you try to push back the response is likely to be ‘JFDI’ (‘Just flipping do it!’), so not much sympathy there then!

This is likely to come across as somewhat unfeeling, so it might be useful — even consoling — to know that those who are dishing it out to you will already have enough on their plate, too. (Actually if you were to really look long and hard you would realise that you wouldn’t want to be in their position!) So it looks like we’ll all be feeling it in one way or another.

I imagine that’s not a great consolation, but at least it will help stop you taking it personally.

The Active Transform this week is Caput Draconis (14) in the ninth house (Taurus).

This suggests that the best way to deal with all the hard physical work this week will be to keep your own thoughts and ideals as your inspiration.

See wider than your work.

You will find it helpful to think about and to really apply your inner philosophy.

The Flow to the ninth shows us that you will be able to find a nobility in even the most mundane of tasks.

So don’t take what happens personally. Rather use whatever happens as a way to reinforce the truths you know about life and the way the world works. Keep your mind clear and don’t let it descend to their level or the level of your problems. Avoid all temptations to pettiness and retribution, it would only make matters worse.

Seek meaning and seek to deliver on your philosophy, for your own benefit and peace of mind, even if not directly for the benefit of others.

By doing so you will strengthen your core and your mind, developing an inward determination and stability that no one can shake.

The Rogue this week was Fortuna Major in the fifth house (Capricorn):

Always look for new ideas and a mental way out and forward.