My beloved wife had been looking for her qualification certificates for some time and could not find them anywhere.  She could remember them being in a briefcase but we couldn’t locate the briefcase in any of the logical or obvious places.

Could it be in the loft?  We supposed not, as you don’t tend to put important paperwork into a loft, but rather to keep it with other important documents – secure, but fairly readily accessible.  Having run out of other places to try I suggested that maybe the documents had been taken out of the briefcase and then the briefcase had been put into the loft.

This turned out to be (ahem) the case.  The case was found but it was suspiciously light – there were no documents inside! 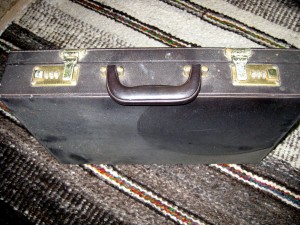 Dusty briefcase from the loft

This was a puzzle, so I thought we should ask the oracle.  I asked my wife to formulate a question and keep it in mind as she drew to gemstones.  She used a die to assign the houses.

She drew Aquisitio in the first (Leo) and Carcer in the 11th (Gemini).  Adding the two gives us Fortuna Minor in the ninth (Aries).  Fortuna Minor was interesting. . . some good luck, perhaps.

I consulted an excellent book to get some further details: Horary Astrology plain and simple by Anthony Lewis.  Now while the book deals with astrological principles, the planets and houses have a direct relevance to Astrogem Geomancy.

Relating to the matter in hand, Jupiter is concerned with long journeys, lawers and higher education.  Saturn is concerned with restriction, loss, austerity, real estate and tribulation.  The Sun, in the form of Fortuna Minor, was in the ninth house and the ninth is associated with lawyers, voyages and systematic organised thought.  In Aries it suggests locations ‘near heat or warmth’.

This gave two places to look – on shelves on the wall of the room immediately behind the open fireplace, and the front porch which gets very hot in the afternoon.  I thought we should be looking somewhere near some legal papers or something to do with travel.  Both turned out to be right – and wrong.

Side note:  We had drawn the gemstones and then my wife had to go out for an appointment, so we planned to act on the divination later.  I was keen and thus started looking, keen to get started.  This desire for expansion, drive and progress is a very Jovian characteristic.  My wife’s diligence at keeping her appointment and leaving looking until later is very Saturnian and as a result we had Fortuna Minor’s minor success. Interestingly, adding the geomes gave Fortuna Minor with old taps at levels one and three and new taps at levels two and four. The new taps were very interesting:  It seems I had to think a new thought and I had to act anew externally, too.  So why had I not been successful?  The answer came straight away: the question had been unclear.  I hadn’t checked and clarified it before we started!

When my wife got back, we performed another divination, this time with a much more focused question.  This is what we got this time:

Amissio in the eleventh (Gemini) followed by Fortuna Minor in the sixth (Capricorn).  Adding them gives Conjunctio in the first (Leo).  I wanted to focus on the resolution (the addition) of the geomes this time rather than on the parent geomes (which might have revealed the circumstances around the situation).

Leo suggests recreation, playing, places for fun and entertainment and occupations that allow for creative expression of the self.  The first house represents the home in the sense of where the querent spends most of their time, the entrance to the house and also how they see themselves.  As a fixed sign it suggests a hidden place (well, yes!), a place low or near the floor. Mercury, associated with Conjunctio, suggested travel, papers, communication and young people.

It was my wife who found them!  They were in a secure and largely hidden compartment of a folder near the floor (fixed sign) of the personal portfolio (first house) she took with her to get a job (Fortuna Minor in the sixth) at a playgroup (Venus in the eleventh) as a creative instructor of young children (Mercury in Leo). 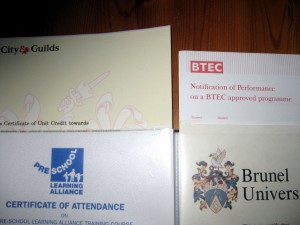 Found them – the lost certificates!

What can we learn from this?  Well I think the following can be useful to bear in mind:

To do anything else does not ‘respect the oracle’.

From a rational and scientific standpoint we can only say that this is interesting. We are open to the accusation of selective observation and retrofitting the facts. Guilty!  But here’s the thing:  We were stuck and it got us moving, and moving to success!  That is one of the primary functions of Astrogem Geomancy, to get you un-stuck and moving forward.  Just doing more of what is not working doesn’t help.

The certificates had been missing for five years.  Within an hour of using the oracle they had been found.