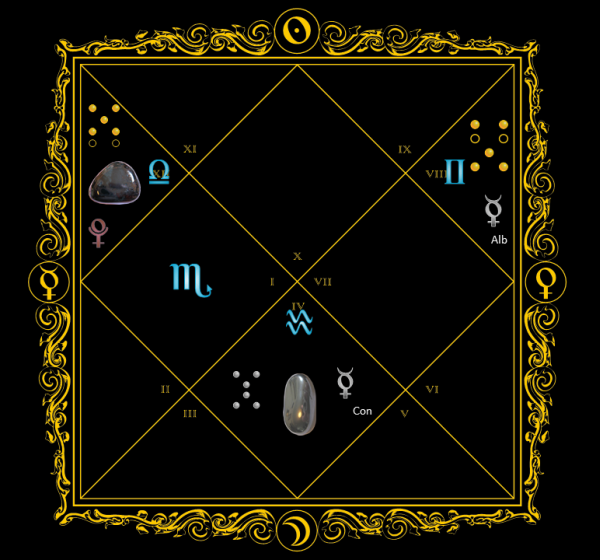 It seems that you have been letting things build up to a head.  This is all well and good as some plans have taken time to mature.  Now, however, it is time to sort out exactly how you’re going to proceed.

This is a time when you can clear out the unworkable dreams from the closet of your mind.  In some ways this is going to feel like you are emotionally telling off some of your ideas.  But given the aspect between the geomes you are definitely going to be able to turn any adversity to your advantage… if you just think it through.

There are two main things to consider this week: the fact that you have a huge basketful of ideas and that some seemingly useful thoughts and actions are being blocked.  Let’s take these two points in order:

In order to make progress with all your young thoughts and ideas you need to do one simple thing.  You need to whittle them down to what is workable.

How do you do that?

You look at each one of them as dispassionately as you can and ask yourself this question – does this fit with my core values?  If it does fit then it may have a place in your life.  If it doesn’t, get rid of it immediately.  You simply don’t have the space for any dead wood.

And yes, I really did say ‘dispassionately’ in the sentence above.  It’s almost like you have to take yourself out of the equation in order to see if the idea will stand on its own two feet without your support.  Again, unless your plans have almost a life of their own and would seem useful in a generally applicable way, then they will probably need too much nurturing.  You can’t afford the time to babysit them at the moment.

As for thoughts and actions which are being blocked it is again likely to be a matter of seeing what exactly is being blocked – you, or the idea itself.

If it’s you, get rid of the ego.  Challenge your own limitations and stop going head-to-head with others.  And if your ideas and what you’re planning is useful then it should stand on its own merits.

This is a time of accounting.  There’s too much going on in your mind and something will have to give.  Make use of the Flow to ruthlessly weeded out what is unworkable.  Let the Flow help you sift out your dreams this week.  Given the trine aspect between the geomes everything should work well if you trust your intuition.

This is a time when you can face any difficulty.  So long as you don’t take any obstacles, opinions, seeming lack of resources or any other limitation to heart you are likely to do well this week.

You are likely to find as the week progresses ­- and if you act on the suggestions above – that matters become increasingly clear to you.

You will probably find that you can reduce the amount of effort you are putting in to life because you are focusing your energy where it is likely to be most appreciated and useful.  This in turn will give you a practical, honed and better capacity to work on what is really important – those things which define what you are.

There were no Rogues this week.

Rubeus in the 12th (Libra) is likely to prove a knife-edge for your plans.  That said this is a very favourable aspect to the fourth house (Aquarius).

This is a Flow which will allow you to clear things away once matters are benchmarked against what is truly in your interest.

The Active Transform Albus (2) shows the collapse of taps from Level 3 of Rubeus to Conjunctio to expand out again to 2 new taps at Level 2 in Albus.

What was hidden gets transformed by assessing its true worth to create a leaner, more effective approach.

To find out how to become one of The Sixteen Hundred, click HERE. Register for your free Geomantic reading course in the box on the top right of the page. To go to join the Astrogem Geomancy group on Facebook, first ‘friend me’ HERE and then click HERE to see the page.