As I mentioned last week, this week — today — is Yule.

I recorded the last sunset of the solar year yesterday and the first sunrise today. This is what happened:

I went out a few minutes before sunset in order to get a feel for the atmosphere of the moment.

At first I felt a little saddened that the sky wasn’t clear, but perhaps the year wanted to draw a veil over its departure. In many ways I could sympathise, but we’d all done our best. And we were here to see it through.

Next, I noticed the rain. It was steady but not heavy. I took a flash picture and it showed the raindrops frozen in their fall through the air. 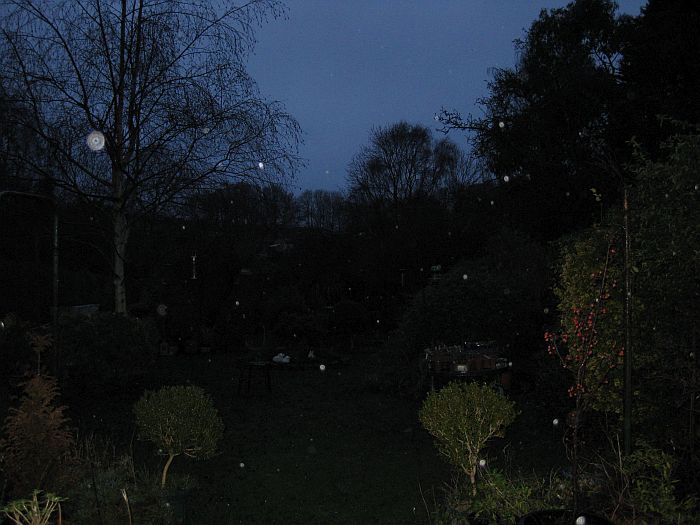 Raindrops
Then I noticed the sounds: the distant ‘veruuuuup’ of acceleration of traffic and and ‘susssssh-es’ of tyres on wet roads. There was also the soft ‘plupping’ of raindrops on the brim of my hat. And I sent out thoughts to all those who might be witnessing with me.
There would be no chance to see the sunset itself, but I stood to witness it anyway. As the moment approached I imagined the year letting out a final breath and saying… ‘So, that’s over… rest now’. 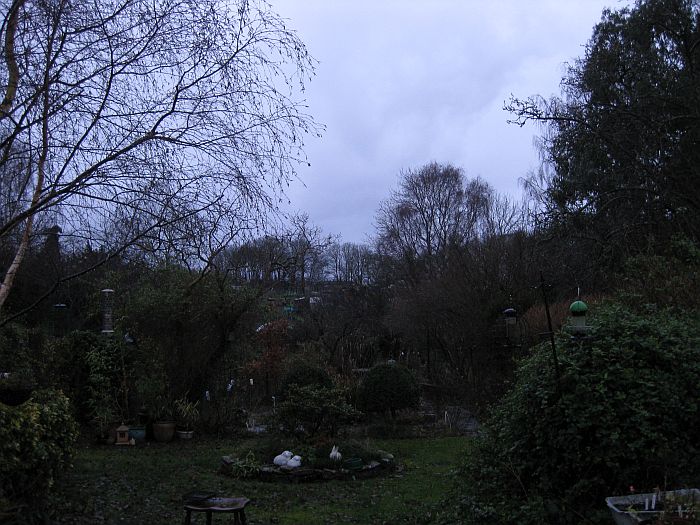 The moment of sunset
I waited a little longer and took another picture, but that’s all there was… 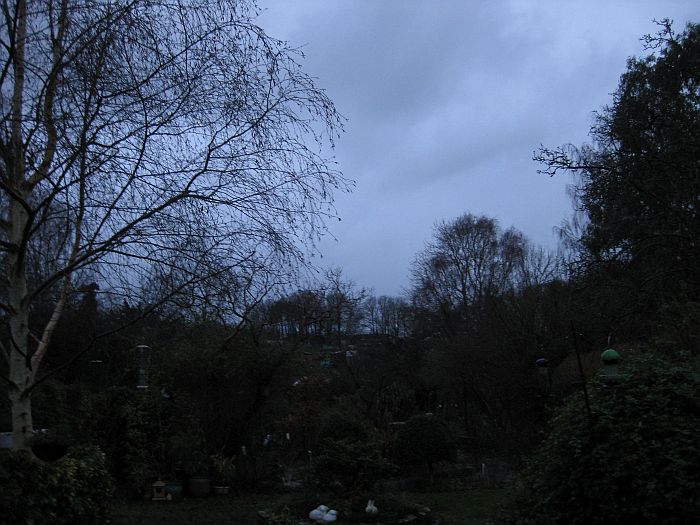 I was up bright and early next morning and got ready for the sunrise. It was still damp underfoot and there was a light wind. Walking to my chosen vantage point I saw the old moon beaming from the side of the larch tree. 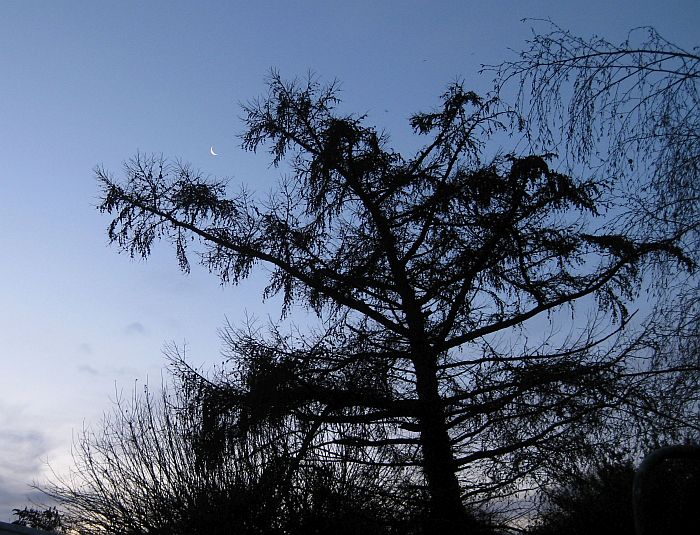 The old moon in the larch tree ten minutes before sunrise

Cycles within cycles…The sky was clearing and the crows were calling and settling on branches nearby. It was as if they knew what was happening and were calling their friends to hurry up and take their seats. 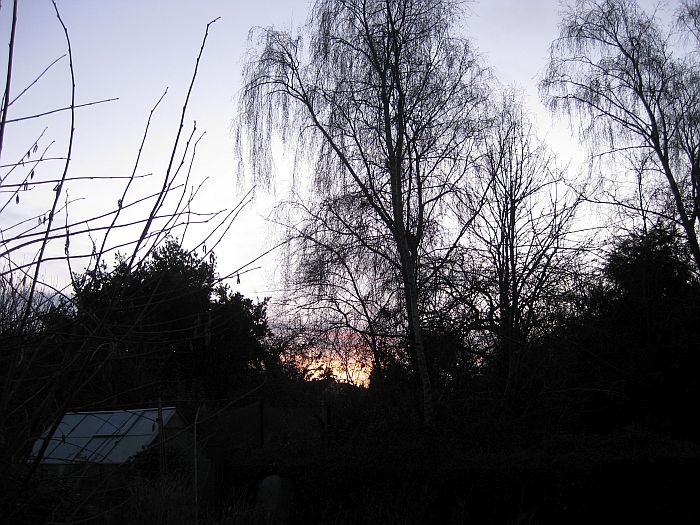 There were some breaks in the cloud and it was rapidly clearing overhead. Again, I tried to feel the community of sun-watchers waiting to greet the new day and new year.

I felt as if the sun was just waiting for the moment of its entrance. It was a dual feeling of waiting in the wings with ‘I’m not going on until everyone is ready and I’ve heard my cue’ but this feeling was then overtaken by an immense naturalness which said ‘I’m going to do this anyway, ready or not, I don’t care — I’m just going to do my thing!’

The horizon was very bright at the moment of sunrise but there were clouds low down. The sky was largely clear apart from the horizon, but there was no definite sighting of the sun. 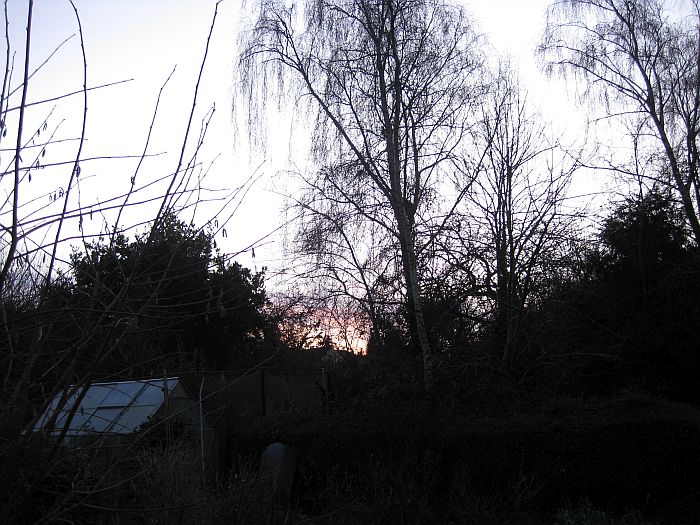 Sunrise
I took the picture to show I was there. I was there. Everyone who was there was there.
I took another one minute later. The new year had begun. 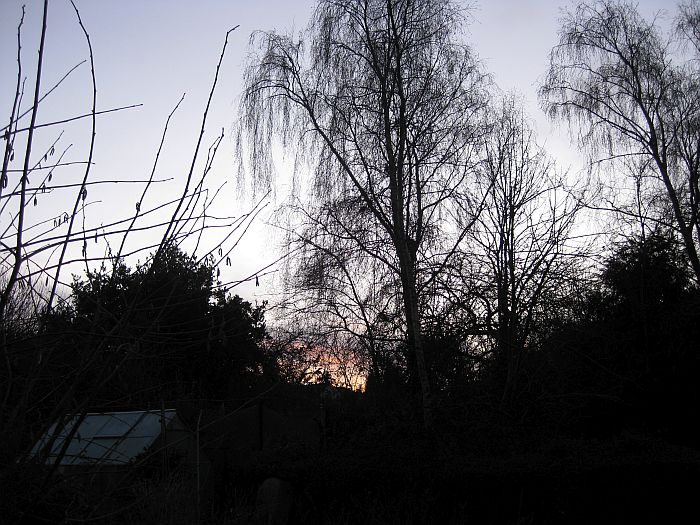 One minute into the new day and new year

Within a few minutes of sunrise the sky had clouded to overcast once again.

But we were there.

Happy new year, everyone. I wish you all peace, prosperity and progress.

The Astrogemanti sent in pictures and stories from around the world:

Thank you to all who participated and shared their experiences!
Amanda-Jayne D. was out and about. Although she couldn’t get sunset on the Last day she sent in two sunrises!
The first was taken though the opening of the long barrow at All Cannings in Wiltshire at the start of the Last day: 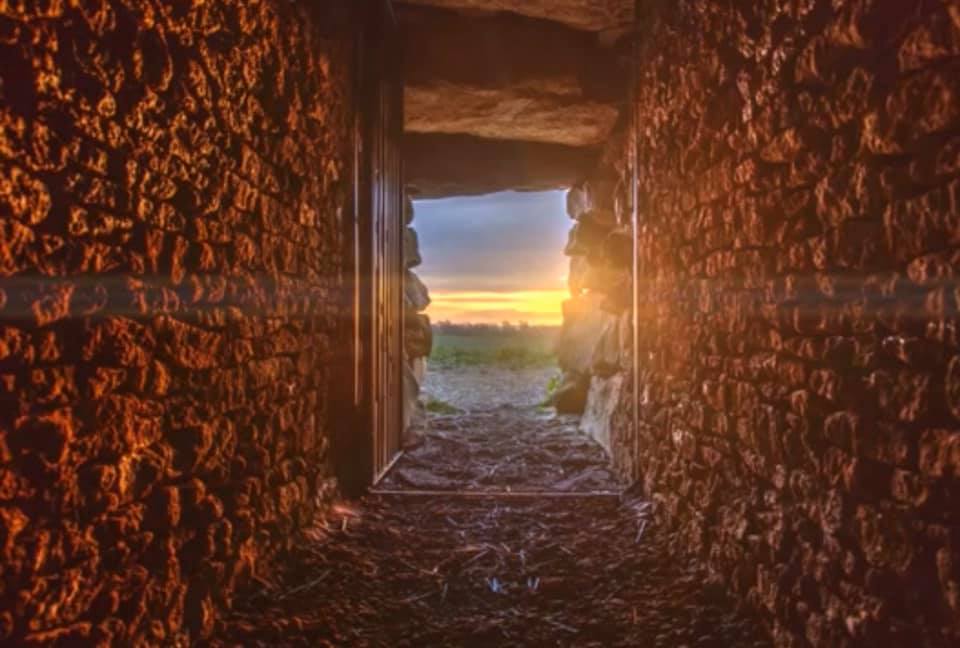 This second was taken at sunrise of the first day at Pewsey Wiltshire: 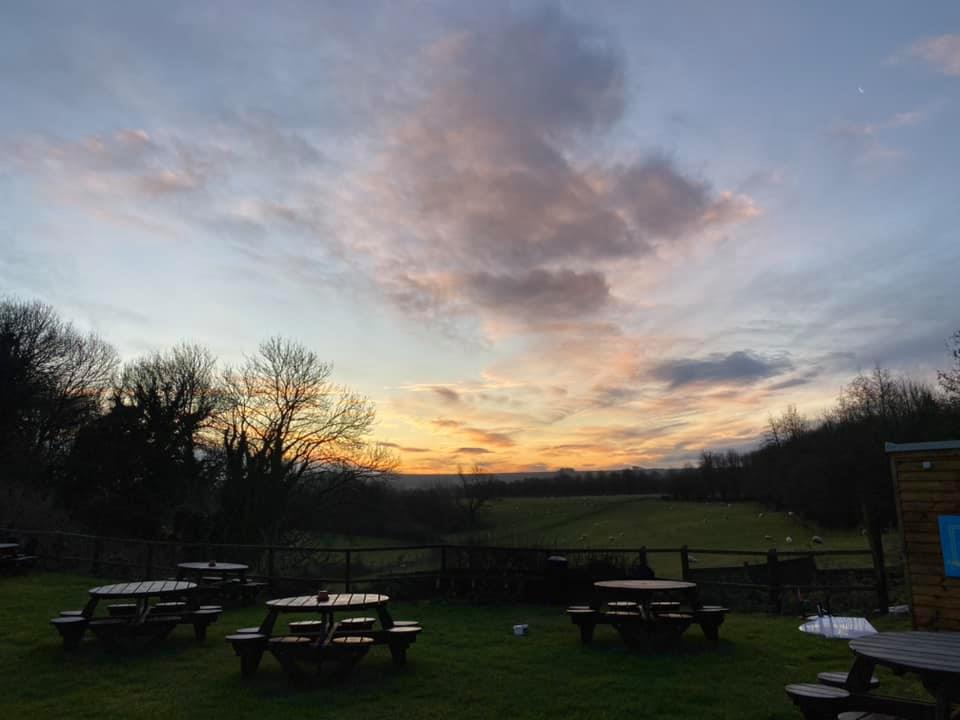 Lots of people commented on the rain. It seemed to be almost everywhere!
Mariam D. wrote:

“I wish you a blessed Yule!!
Here in Austria it is raining intensely all day…
…thinking of you and all the others that are celebrating Yule!
Good start into the new light!”

Sam C. in Parcieux, France was succinct, poignant and spoke for many:

“A little cleansing rain for the end of the year is appreciated.  Off to a fresh start with a “vector” (a direction with magnitude)!”

“I was there, too—maybe without a camera and on a different timetable than you, but I was there. It was nice knowing others were doing (or had done) the same from different parts of the globe. I spread the idea to a friend in North Carolina and she said she would do it too (see what you started? How wonderful.) It was fun to feel the comparison—the setting of one year and the waking of the next. It has suddenly put me in a great frame of mind to clean the house! (I was planning to do some cleaning and grocery shopping today and tomorrow anyway to prepare for Christmas/New Year but now I’ve got more of a spring in my step about it–I’m much more in the mood to enjoy the chores ahead as a ritual to welcome the new year—so thanks for that.)”

(Sorry for inducing you to do chores, Jessica! *laughing*)
We all have our own stories and lives…
We connect in sharing experiences. This from Pauline E.:

“My experiences was more traumatic.  My father was hallucinating and spent the night trying to escape the hospital. (medication induced). Moments of comfort was seeing the moon from outside the hospital, so beautifully bright as morning appeared. Too many lights to get a photo.  Help keeping me sane in a way as I said good bye to a difficult year. Dads turned the corner today and tho still very ill he is slowly coming back to us.”

“Here are some pictures from me, here in Puerto Penasco, Sonora, Mexico at the El Mirador beach which is just minutes from where my RV space is. This was the sunset on December 21st – or the last I could see the Sun before it disappeared behind this very dense cloud bank! 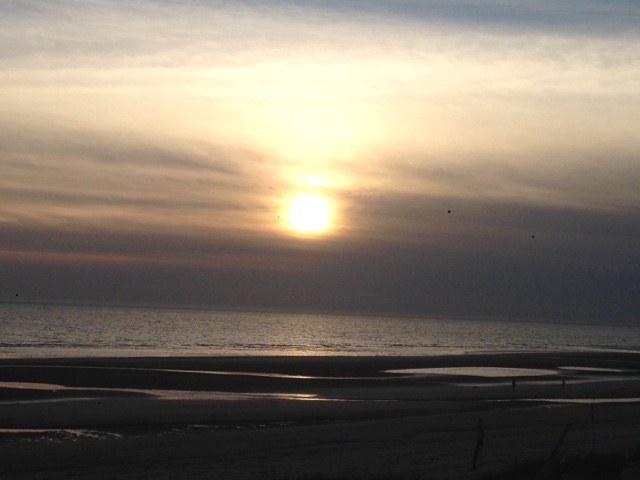 “This was the “pre-show” colors before the Sun peeked up over the horizon! 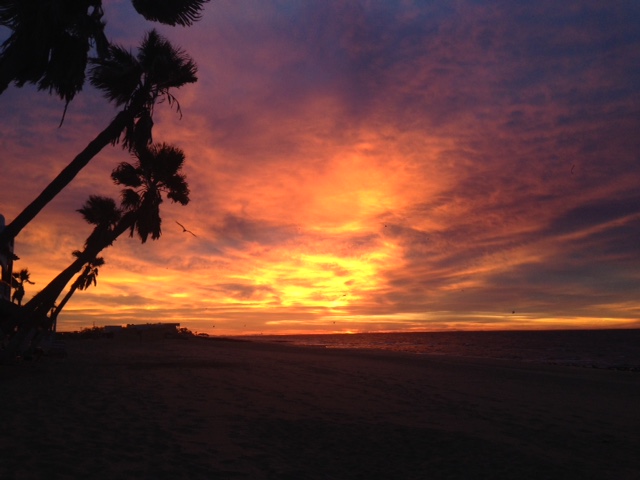 “The first peek over the horizon around 7:28 AM here! 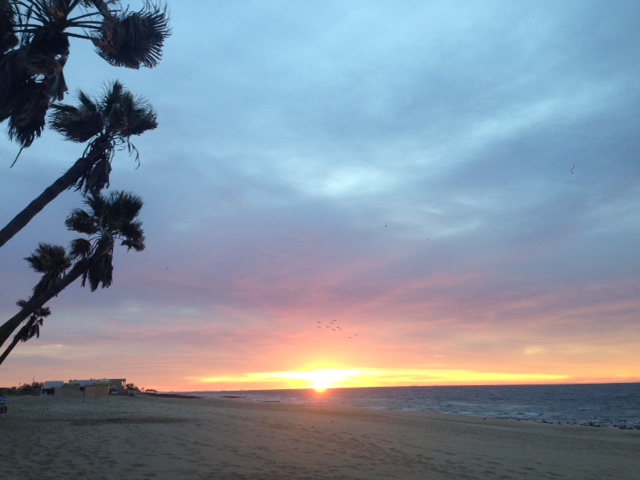 “I noticed that the Pelicans seems to like to do “flight school” in large groups when the wind is blowing hard here – this morning it was blowing so hard, and was so chilly that I had tears streaming down my face! 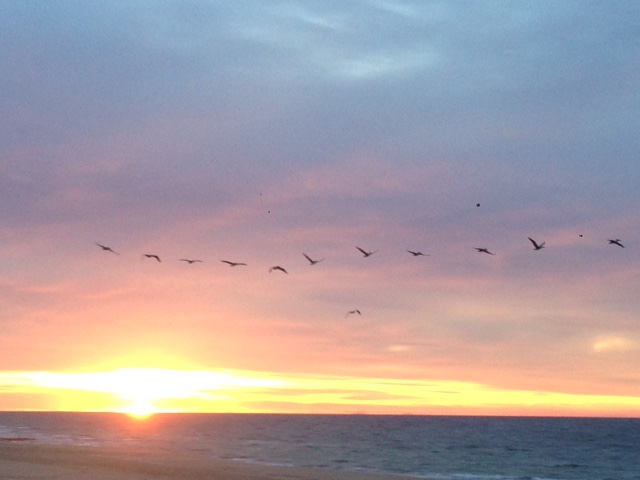 “Now for the opps I did when I took yesterday’s sunrise – I’m including it because it’s pretty too! 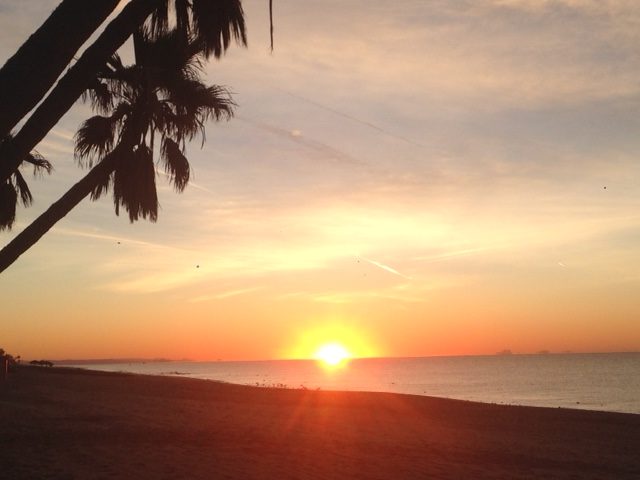 “Anyhow – I enjoyed the timing on all of the experiences – The birds were much nosier on yesterday’s sunrise as there was no wind!
Today between the Pelicans doing flight school training and the Seagulls were doing an aerial ballet in the wind currents!
Welcome the days getting longer as I feel much lighter and more alive with the extra time of light!
Hugs to all…”

She also included a poem which she wanted to share:

Walk the Beach
. . . To find a treasure.
To exercise the limbs, to soothe the soul.
To praise God and to admire His handiwork.
To marvel at the birds that play against the sky and clouds.
To watch the waves
As they dance their way over and around the rocks.
To feel the sun and the wind pressed against my face
And to run from the foam grasping for my feet.
To think . . . to reflect.
To see a million years of conflict
And to realize that life is as simple as . . .
‘THE LAND AND THE SEA.’
To walk hand in hand with nature
And draw upon its energy . . .
Which is never-ending and as constant as the stars.
And no matter how far apart my visits might measure . . .
I am always free to renew an old acquaintance with myself.
Peter Dueber

Thank you all for your Contributions.
It is great to know you are out there — and in here. *points at heart*.
With all good wishes for the New Year,
Les